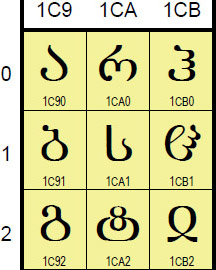 The beta review period for Unicode 11.0 has started. The Unicode Standard is the foundation for all modern software and communications around the world, including all modern operating systems, browsers, laptops, and smart phones—plus the Internet and Web (URLs, HTML, XML, CSS, JSON, etc.). The Unicode Standard, its associated standards, and data form the foundation for CLDR and ICU releases. Thus it is important to ensure a smooth transition to each new version of the standard.

Unicode 11.0 includes a number of changes. Some of the Unicode Standard Annexes have modifications for Unicode 11.0, often in coordination with changes to character properties. In particular, there are major changes to UAX #29, Unicode Text Segmentation. Seven new scripts have been added in Unicode 11.0, including Hanifi Rohingya. A major adjustment has been made to the Georgian script, with the introduction of uppercase Georgian letters. There are also 66 additional emoji characters.

Please review the documentation, adjust your code, test the data files, and report errors and other issues to the Unicode Consortium by April 23, 2018. Feedback instructions are on the beta page.

See http://unicode.org/versions/beta-11.0.0.html for more information about testing the 11.0.0 beta.

About the Unicode Consortium

The Unicode Consortium is a non-profit organization founded to develop, extend
and promote use of the Unicode Standard and related globalization standards.

The membership of the consortium represents a broad spectrum of corporations and organizations, many in the computer and information processing industry. Members include: Adobe, Apple,
Emojipedia, Facebook, Google, Government of Bangladesh, Government of India, Huawei, IBM, Microsoft, Monotype Imaging, Netflix,
Sultanate of Oman MARA, Oracle, SAP, Shopify,
Symantec, Tamil Virtual University, The University of California (Berkeley),
plus well over a hundred Associate, Liaison, and Individual members. For a complete member list go to
http://www.unicode.org/consortium/members.html.